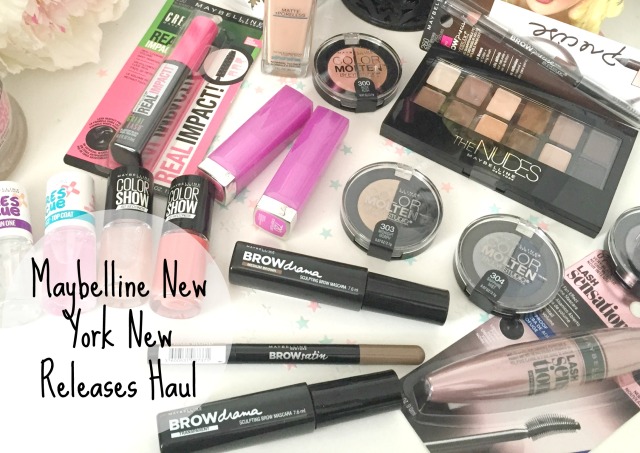 Let’s chat about Maybelline! First off – Maybelline NY is one of my favourite drugstore brands! I find they are always creating decent dupes of high-end popular products. Their mascaras are on point. They have a fantastic range of lippies. I’ve heard their Master Precise liner is pretty wonderful. All-in-all, I’ve always found the products I’ve tried by Maybelline have been pretty decent for a drugstore brand.

A few weeks ago I was lucky enough to attend the Maybelline New York New Fearless Femme event to celebrate Maybelline’s 100th birthday and launch the new products that are being released in NZ/Australia. The event was at Molten bar in Auckland and I went with my lovely friend xlivlovesmakeup. This was my first bloggers/PR event and I had a ball! We started off with some drinks and nibbles and caught up with a few friends (and met some new people). Then we were ushered into a beautiful garden area where there was a presentation and there were three gorgeous makeup artists applying the new products to some models who were equally as gorgeous. We got to witness the makeup being applied and had the opportunity to ask questions, chat, swatch and get our makeup done by the makeup artists too. (I didn’t get anything done to me because I was A. too scared and B. already had a semi cake face). 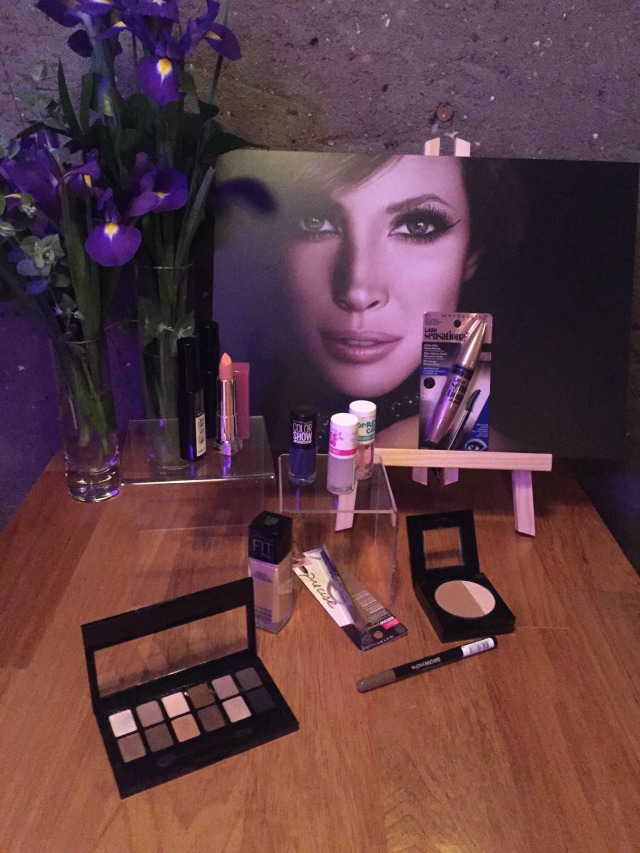 The ladies from Maybelline and from their PR were so lovely and super friendly. I had a fab time! One of the best parts of the evening was the goodie bag we got on the way out. It was filled with a mixture of some of the new releases which are coming out in July.

There are 13 new products hitting our shelves in NZ and Australia and I was lucky enough to pick up most of them.

Here is a full list of the products & prices;

Phew! So many products! (Don’t worry, I totally copy and pasted the Maybelline New York part – ‘aint nobody got time for that!). I got a bit of everything apart from the Master Sculpt and the Brow Satin (I got the Brow Satin but it was in blonde, so I’ve put it aside for a giveaway). FYI – the Master Sculpt looks AMAZING. GUYS! It’s a flippin’ CONTOUR AND HIGHLIGHT DUO! Like why have I not heard of this before?! Where has it been all my life? I swatched it and it was perfection! I need to pick one up ASAP.

Here’s my array of goodies: 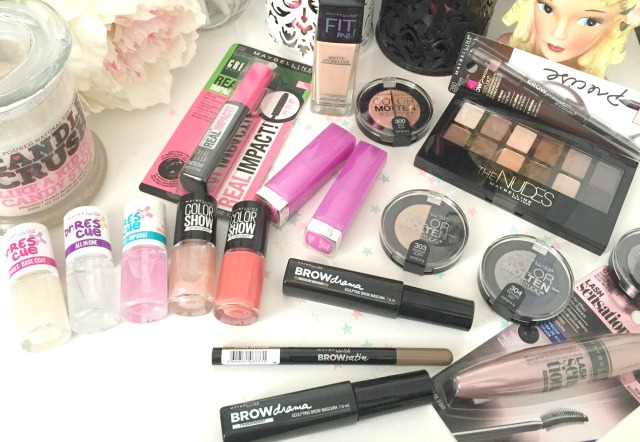 I’ve tried a few of the products already but I won’t post a full review here yet – just let me know if you’d like to hear more about any of the products!

The Dr. Rescue nail polishes are lovely! I got all three of the new ones coming out, plus a couple of the normal Color Show shades. (I love that they dry in 60 seconds!). I’ve used these a few times and I am totally impressed. I usually bite my nails and I hate it when I take the time to paint my nails and the polish scrapes off or chips after a day or two. This stuff makes it stay for forever!

These are the Rebel Bloom lipsticks in Hibiscus Pop and Power Peony. There are 10 shades altogether and Maybelline says they’re made with honey nectar (which I quite like the sound of). I love these shades and I LOVE the packaging on these lipsticks. There’s something about that lavender. I’m glad I got these two because I was eyeing them up all night long.

I was lucky enough to get the Fit Me Matte+Poreless foundation in a shade which is very similar to my natural shade. It’s in 120 and it’s probably a shade too dark, but it’s fine if I have a bit of fake tan on or something. I’ve been holding out for this foundation for forever! I wasn’t a huge fan of the original Fit Me foundation, but I heard this one is different and much better. Plus I’m glad it’s for oily skin because that is my skin type! I’ve tried this a few times and it’s lovely! Comment below if you’d like an in-depth review!

Da-dada-daaaa! The Nudes Palette is FINALLY out and Oh BOY is it beautiful. I like that it’s got a lot of shades in there and they’re just in smaller pans. Because Lord knows I barely hit pan on an eye shadow palette I have SO many! The Color Molten Eye Studio Duo’s are interesting. They’re a weird consistency – sort of like Colourpop or the Australis Metallix eye shadows. Like a creamy texture. I’ve kept one aside for a giveaway at some point and have played around with the others a few times. I’m not sure what I think of them yet. Let me know if you want to know more about The Nudes palette or these Color Molten Duo’s! 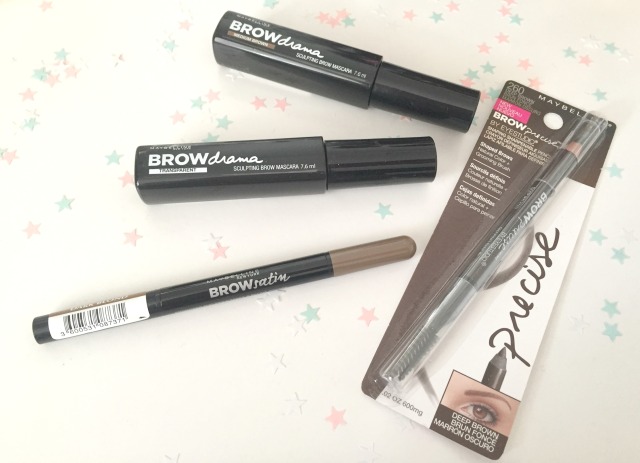 Oooh new brow things are always exciting! Maybelline knows what’s on trend and brows are it! They’ve got a little bit of everything here (I’m sensing a pomade next on the release list). The Brow Satin unfortunately is in blonde so it’s far too light for me! However I think I’ll probably hunt one down so I can try it out because it looks really interesting. It’s a gel sort of liner on one side and a powder on the other! Would be great to try and the packaging is nice. The Brow Precise pencil is lovely. I’ve been using it every day. It’s super duper pigmented though so you have to be careful! I love pencils which have a spoolie on the end because it’s just so handy! The Brow Drama is interesting. I’ve got it in Translucent and Medium Brown – although I’m probably more of a dark brown. I’ll have to do another blog post on it sometime because the end of the brush is in a weird ball shape and I don’t have a photo of it. It sounds cool but it actually makes it sort of difficult to get a precise brow – which is important to me. However I’ll keep trying and let you know how I get on!

Eeek! I don’t have a photo of the two mascaras – but I haven’t cracked them out yet because I am in the middle of an awesome mascara at the moment and I hate having two open at a time! However the Lash Sensational Mascara will definitely be next on my list to try out!

Apologies for the lack of photos but winter means that I cannot take photos Mon-Fri because I leave the house when it’s dark and get home when it’s dark and the good lighting only lasts for a few hours in the weekend. So when I forget to take a photo of something I’m in trouble!

Overall, I LOVE the new Maybelline New York range! It’s great to have some of the products we in NZ have been lusting after for years finally launch here. It’s also cool to see some surprises in the mix! As I said a million times, please let me know if there’s anything you want to hear more about! I would’ve talked more about each product but this post is already 1200 words long and y’all know I can write!

Have you tried any of these products?! LET ME KNOW WHAT YOU THINK! We can chat about it below. I love to talk makeup!

Also there’s about a million hauls coming to the blog in the next week or so, I’ve got to split them up or there would be too much stuff for one blog post! I’ve got some Colourpop (naturally), Mac, clothing, Gerard Cosmetics and plenty more so stay tuned! Is there anything you’d like to see me write about? Let me know – your wish is my command!